The Atari Portfolio is a IBM PC-compatible palmtop PC, and was released by Atari Corporation in June 1989, making it the world’s first palmtop computer. The Portfolio uses an Intel 80C88 CPU running at 4.9152 MHz and ran “DIP Operating System 2.11” (DIP DOS), an operating system mostly compatible to MS-DOS 2.11, but with some DOS 2.xx functionality lacking and some internal data structures more compatible with MS-DOS 3.xx. It had 128 kB of RAM and 256 kB of ROM which contained the OS and built-in applications. The on-board RAM is divided between system memory and local storage (the C: drive). The LCD is monochrome without backlight and had 240×64 pixels or 40 characters x 8 lines.

There is an expansion port on the right side of the computer for parallel, serial, modem or MIDI expansion modules. It uses a BeeCard expansion port for removable memory, which is not compatible with PC card as it predated that standard. Expansion cards were available in sizes of 32, 64, and 128 kB initially, and later were available in capacities up to 4 MB. The expansion cards were backed up by a replaceable battery, which last approximately two years. Built-in applications include a text editor, spreadsheet (Lotus 1-2-3 compatible), phone book and time manager. Expansion cards contained programs such as a chess game, a file manager, and a finance manager. Most text-based MS-DOS applications can run on the Portfolio as long as they did not directly access the hardware and could fit into the small memory.

The Portfolio appears in the film Terminator 2: Judgment Day, where it is used by the young John Connor to bypass security on an ATM with a ribbon cable connecting the Portfolio’s parallel interface to a magstripe card. The Portfolio reappears later in the movie, when John uses it in the Cyberdyne Systems lab to retrieve the key to the vault containing the arm and CPU of the first Terminator.

This is the collection of original hardware and software. None of this collection is for sale. If you have an item which is not on the list, please contact me and maybe we can trade. Donations are welcome too 🙂 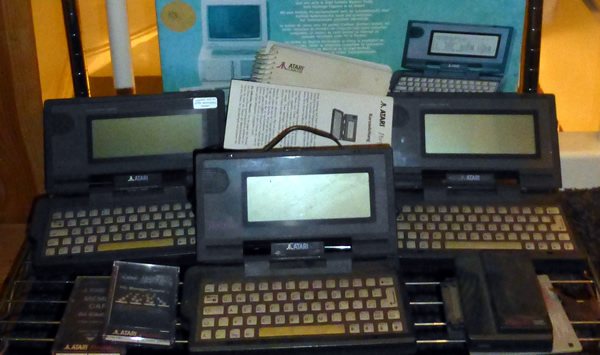